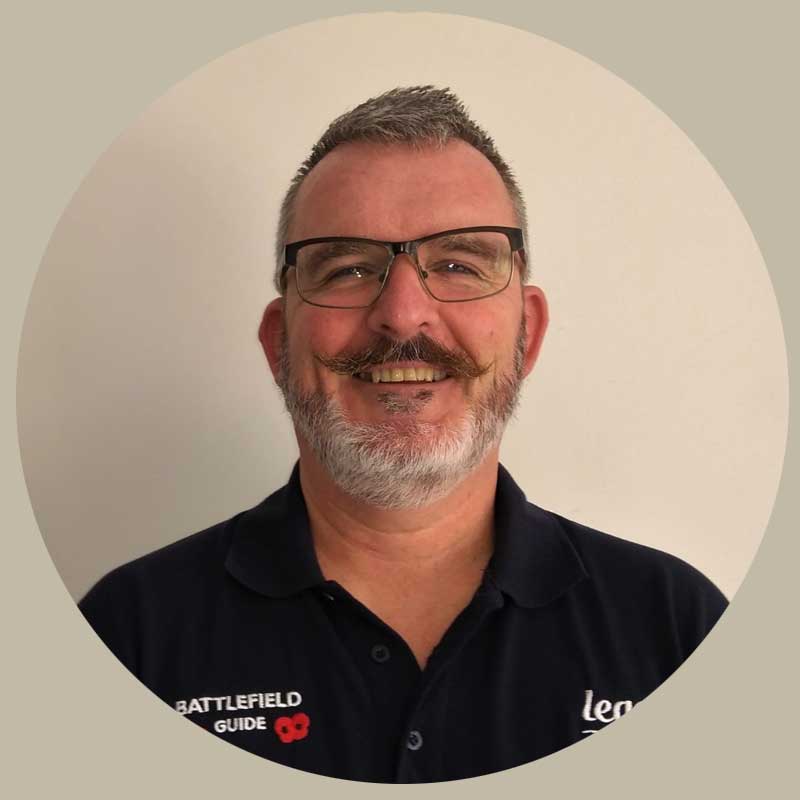 I have recently retired after 28 years’ service as a Purser with British Airways; a career which enabled me to visit many battlefields worldwide. Prior to that I served as a police officer in both the UK and Bermuda. Concurrent with this, during the early 80’s I experienced many of the large-scale BAOR reinforcement exercises in Germany whilst serving in the Territorial Army.

My lifelong interest in military history began with tales from my Grandfather of his WW2 experiences as an ARP Warden, then as an older soldier serving with the 8th Army in the Western Desert and his seemingly never-ending collection of memorabilia ‘acquired’ in that war. A child of the 60’s ‘Airfix’ generation, this grew into a passion for learning and I now research 20th Century Conflict, specialising in the First World War.

‘All Quiet on the Western Front’ – the tour gives a good overview of the conflict in the main western front areas, especially for those who have not visited before. Those researching family members who fought in the First World War find it helps to put many things into context.

My Most Memorable Experience

After some time researching I was able to take one of my relatives to the exact place that her uncle, serving as a 19-year-old Subaltern in the Royal Sussex Regiment, was buried in a field grave following his death during ‘Operation Michael’; helped by the meticulous record keeping of the Graves Registration Unit.

‘All Quiet on the Western Front’

Battlefield & memorial photography. Classical music. Indigenous and first nation soldiers of British Dominions and the Empire; the history of the Royal Sussex Regiment; and memorialisation following the Great War.